Hunger affects everyone and nutrition is an essential part of a full and healthy life. Regardless of income, immigration status, race or ethnicity, every child, adult and family should be able to access food that they need. Undocumented immigrants have a food-insecurity rate 2x of the overall U.S. population. Hunger has serious consequences for health, financial security, and children’s long-term success. In California, one of the wealthiest economies in the world, these food inequities must be addressed.

The California Immigrant Policy Center was founded 25 years ago in response to cruel policies which aimed to exclude immigrants from the social safety net, including nutrition programs. In 1996, Congress passed the Personal Responsibility & Work Opportunity Reconciliation Act (PRWORA), which restricted SNAP (“food stamps”) eligibility for immigrants across the country. In response to this “welfare reform,” CIPC partnered with advocates across the state to lead campaigns that resulted in the creation of the California Food Assistance Program (CFAP), which provides state-funded food stamp benefits to qualified immigrants who are ineligible for federal food stamps.

Today, CFAP serves about 38,000 “qualified immigrants” who lost federal SNAP eligibility due to federal welfare reform legislation in 1996. Most of these people are lawful permanent residents (green card holders) of less than 5 years. Aside from being state-funded rather than federally-funded, CFAP and CalFresh benefits are the same— issued and used to buy groceries through the same Electronic Benefits Transfer (EBT) card. CFAP participants may also be lawful temporary residents, victims of trafficking, U visa/interim relief applicants, or U visa holders.

However, the legacy of discriminatory policies in our safety net remains and many low-income Californians lack access to CalFresh and CFAP, the country’s largest and most effective anti-hunger programs. Federal laws exclude undocumented immigrants, DACA recipients, Temporary Protected Status (TPS) holders, and certain visa holders from CalFresh, but California has a long history of recognizing that immigrants are an essential part of our state and has the power to make CFAP more inclusive. Programs like CalFresh and CFAP, have lifted nearly 700,000 Californians out of poverty and provided food access to 4.1 million Californians. Yet, many low-income Californians remain excluded from accessing CalFresh and CFAP due to arbitrary immigration status requirements. Research shows that access to CalFresh improves overall health outcomes of low-income participants and lowers health care costs over the long-term. For example, increased access to CalFresh delivers $2,100 in annual health care savings per senior enrolled.

Food is fundamental to the dignity of all human beings. However, the reality is that many Californians lack the resources to afford the healthy food they need. Despite the contributions immigrants make in California, many have experienced unprecedented food insecurity during the pandemic. We must ensure that immigrants are not left behind as our communities recover from the pandemic. With inclusive policies like SB 464, we can ensure food access for all Californians, including immigrants, and create a healthier California.

In 2021, CIPC and NourishCA launched the Food4All campaign, co-sponsoring Senate Bill (SB) 464 with Senator Melissa Hurtado, which would modernize the CFAP program and make the program accessible to all Californians regardless of their immigration status. In its first year, the Food4All campaign secured funding in the 2021-22 State Budget to prepare CFAP for the potential inclusion of Californians currently excluded from the program due to their immigration status. Automation changes to enrollment systems will begin immediately, but the decision to permanently remove immigrant exclusions from the program will be subject to appropriations in future budget years. This victory brings us closer to our vision for Food4All and we will continue to work with advocates to ensure funding for Food4All is appropriated on a permanent basis.

Food4All will reduce hunger, improve health, and help lift Californians out of poverty. When we all have the food we need, California thrives. Now is the time for California to champion bold legislation and put forth an equitable vision for our nation. No Exceptions, No Exclusions!

Join CIPC and the Food4All Coalition to urge your legislators to pass #Food4All this year, to ensure all Californians have access to food.

Are you an immigrant living in California who has experienced food insecurity and lack of access to food benefits?

CalFresh: How to Apply 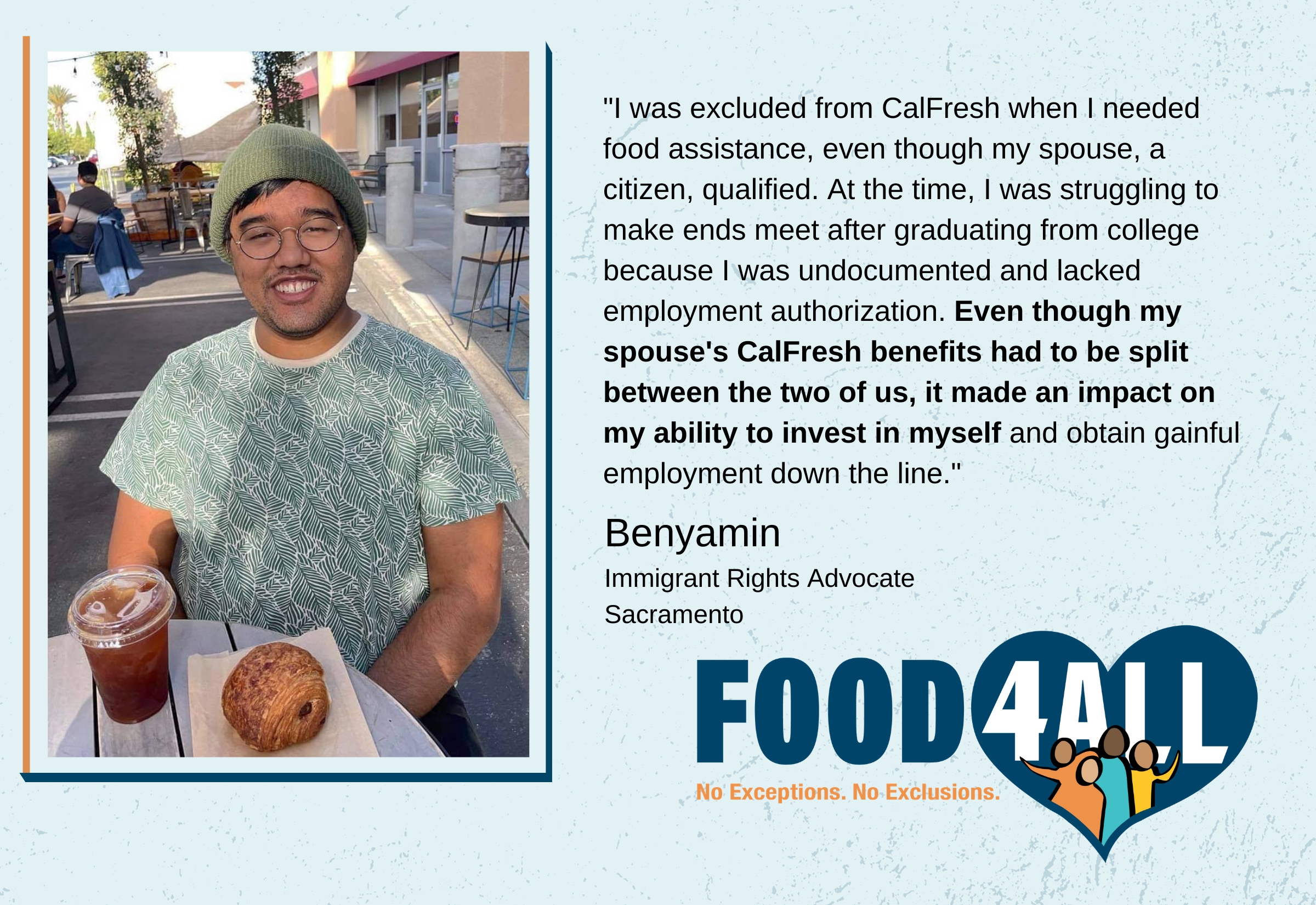 We all believe people deserve access to food. People should not go hungry for any reason.  It’s fundamental to the dignity of human beings. Our goal is to ensure that everyone, no matter their income or status, has access to food.